As a single warm blooded all American girl in a locker room full of Carolina Hurricane Hockey players, it must have been their level of hospitality and kindness that prevented me from blushing head to toe.

My first victim that I sat down to talk cars with was Cam Ward the teams Goaltender. He graciously felt the unnecessary need to apologize for being sweaty being as they had just entered the locker room after an hour long strenuous workout that I was lucky enough to gaze upon. I put him at ease by explaining to him that I had grown up with 6 big bothers and that I was very accustomed to sweaty men.
We started out by talking about his first vehicle which was a Sunfire GT that was a hand-me-down at the young age of 16 and then the first vehicle that he actually purchased was a Chevy S10 pick-up truck.

Cam currently owns a 2004 Bentley Continental GT which has possibly become too flashy for his daily driver needs and a 2007 Cadillac Escalade that he has chromed up with 22 inch wheels.
He must agree with most consumers regarding the Ferrari being his dream car but again possibly too flashy and way too much worry with all of the maintenance and all of that annoying gawking that comes from driving a flashy car such as the Ferrari.

I then got a kick out of his response to my question on how fast he had ever gone in a car.
Cam began to tell me of the experience of stopping by a Porsche dealership one day and the salesperson “that doubled as a speed racer” told him to sit in the passenger seat basically so that the salesperson could display his mad driving skills.
Cam wasn’t too sure on how fast the salesperson got the 911’s speed up to but definitely pushed it to the limit for about 20 minutes by ripping around corners and throwing him into the door panel. This experience seemed to leave quite the impression on him even though his intentions were to test drive the 911 himself.

Cam looks forward to the day that he can spend an afternoon at “The Richard Petty Experience” as we all do.

I then made my way to Rod Brind’Amours locker, the team captain and Center for the Hurricanes where I found him with a very serious look on his face so I intentionally tried to get a smile to break which I was successful enough to achieve!

He was kind enough to ask me to sit down at the adjacent locker then he began to explain how he is more of a simplistic guy when it comes to his rides not a flashy one. After explaining to him that most of my readers drive basic vehicles and not a Ferrari 360 as a daily driver I think I witnessed the light bulb going off in his head that convinced him that I was looking for the norm not the extreme when it comes to cars. He currently has a Honda Ridgeline that he can pull his boat with and a Suburban that he seems to have a love affair with.

Rod smiled and chuckled about his first car being a burgundy Iroc Z that he paid cash for after St. Louis signed him when he was 18 which coincided with the timing of his first driver’s license. Rod’s evolution of cars then jumped to the Cadillac Allante, a V8 Dodge Durango when he started having kids, a Mercedes CLK that generated a devious look in his eye while explaining that ride to me, an ole’ beat up Jeep that he seemed to enjoy at the lake in past years and a Harley that he just sold after owning for about 8 years.

Rod could not pin point to me how fast he had driven in a car but he did make a comment along the lines of loving speed, maybe I will get to the bottom of this question at a later time!

He mentioned a couple times about being an “old guy” but I can personally testify that I did not see anything that hinted to Mr. Brind’Amour being anything but a vibrant-energetic Athlete.

My final question to him was about his possible dream car that he does not currently own and he quickly responded to tell me that it would have to be a Jeep Wrangler with rims that he could pop the top off of and cruise around in. He also seems to take a liking to the old Corvettes, the body style prior to the Stingray. Possibly a big block 1960’s model?

My third and last chat was with Mike Commodore a Defenseman for the Hurricanes. I found myself chuckling as Mike was telling me about his first car which was a 1987 Olds Cutlass Supreme “my dream car in high school”. His dark red Cutlass that his dad had bought for him while in college had a problem with the choke which resulted into a backfiring issue.

Shortly after moving to Raleigh North Carolina, Mike was out killing some time on a weekend afternoon watching baseball and doing a little random car shopping when he quickly noticed that he was walking out of a car dealership without his GMC Yukon Denali keys and had his new 06 Chevy Corvette keys in hand!
I then asked him how fast he had driven in a car and the 06 Vette was his lead foots culprit by clocking it at 110 before slowing down after seeing a cop sitting in the median over a ridge.

He seemed very proud and excited when he mentioned the 08 Ford ¾ ton diesel that he has on order. He stated that he is a fan of American Cars and that his dream car is a step above his current Corvette being the Z06….great choice.

I did not schedule a 4th interview but possibly should have because I think it was the Hurricanes Defenseman Niclas Wallin that walked by and heckled something about his beamer that sounded very intriguing and interesting.

My personal favorite color combination in cars has always been black on black and I was pleasantly surprised and amazed to hear the same from all 3 of these awesome players.

These guys seem to have a dynamic camaraderie going on as friends and teammates and I thoroughly enjoyed my 2 short hours at their practice facility in Raleigh North Carolina. Possibly I will get invited to witness a game in person or another visit to the locker room which I will make sure to wear my prescription eyeglasses at this time!

Barbara Terry
Posted by BT's Weekly Journal at 11:24 AM 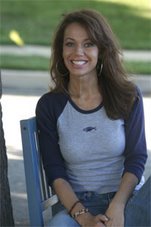